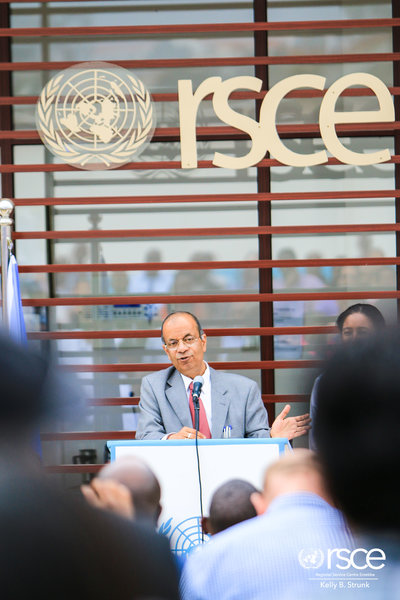 Under-Secretary-General Dr. Atul Khare delivered a town hall to the UNESB on Wednesday 5 July in front of the Regional Training and Conference Centre.  Dr. Khare is the USG for Field Support and was in Entebbe for the annual DMS/CMS Conference.  He was appointed to USG in 2015 by former Secretary-General Ban Ki-moon and earlier this year current Secretary-General Antonio Guterres appointed him to the 9-member High-Level Task Force to Improve the UN Approach for Preventing and Addressing Sexual Abuse.

Prior to the Town Hall Dr. Khare was given a tour of the UNESB which including stops in the RSCE National Staff Service Line and the RSCE Uniformed Personnel Service Line.

USG Khare spoke to the crowd of staff members frankly and with ease.  He highlighted that the peacekeeping budget was approved with less than 700 million dollars of the 7.9 billion requested.  He however noted that a reduction in the budget does not mean staff cuts.  Instead the primary focus should be on operational costs, like aviation, fuel and high cost logistical operations.  Strong impacts can be made by making small adjustments.  He emphasized that the focus would be to make missions more efficient and fit for purpose in what he described as a challenging fiscal time as the US position still unclear.

USG Khare also spoke about his meeting with Prime Minister Dr. Ruhakana Rugunda of Uganda who was pleased with the work being done by the RSCE and who noted that the nationalization is well appreciated by Ugandan government.

He informed staff of the ongoing UN reforms supported by member states which would are targeted at repositioning the United Nations development system to support the 2030 Agenda for Sustainable Development.

The Town Hall concluded with a large group photo just before the rain began to fall.